If you have a website, it is essential to be aware of Google’s algorithm updates and quality guidelines as it can impact the volume of traffic to your website, which can have wider reaching consequences. In some instances where best practice has been implemented, businesses can see an increase in website traffic, while in other cases, sites can be penalised and pushed down the search result rankings, resulting in fewer users finding their website.

Google frequently updates its algorithm throughout the year to improve the quality of the results it serves to those who use its search engine. The recent March 2019 update was confirmed by the search giant in a series of tweets on their @searchliason account.

We understand it can be useful to some for updates to have names. Our name for this update is "March 2019 Core Update." We think this helps avoid confusion; it tells you the type of update it was and when it happened.

What kind of websites were affected?

Websites impacted by the March 2019 Core Update, according to leading Google algorithm expert Marie Haynes, appear to be YMYL (Your Money or Your Life) sites. A YMYL site is any kind of website that can affect your health, happiness, safety or financial state. Google cleverly applies more stringent quality rules on YMYL sites in light of the fact the advice they give out must be accurate and from an expert source.

Moz and Search Engine Watch contributor Haynes also noted in her Google Algo Updates blog that it initially appears that the websites that had benefited from the update, were those who have made E-A-T related improvements.

SearchMetrics posted an insightful blog highlighting that websites that deal with health-related questions were impacted, with some sites seeing a marked increase in traffic and benefitting from competitors sites falling in the rankings.

SearchMetrics also flagged that Google is favouring websites that provide a high level of trust, so strong brands and websites that cover a wide range of health-related topics appear to have benefited from the update, while smaller niche websites that focus on just one area, have dropped a little.

It can take months for industry experts to get to the bottom of the exact impact of an algorithm update. It takes time to analyse trends and to build and review case studies in order to understand what Google is and isn’t looking for.

E-A-T stands for expertise, authority and trustworthiness. Google considers these as important quality metrics. In August last year, Google rolled out an update that heavily impacted websites that were YMYL but not following the three essential E-A-T rules, especially in the healthcare industry.

In fact, one of our own clients was impacted by this and it is something that we have since spent time resolving. We are pleased to see our client now being rewarded within the search results.

YMYL websites are penalised by Google if the content on their site is not produced by a recognised expert and is found to not be authoritative or trustworthy. Most websites that addressed this issue by referencing the recognised authors, as well as making other relevant changes in response to the E-A-T update, have seen ranking improvements since the March 2019 Core Update.

Google has actually stated that this latest update is not a reversal of the August ‘Medic update’, but a continuation of making improvements to its overall algorithm.

Is it possible to optimise a website to benefit from algorithm updates?

Nobody knows exactly what the Google algorithm involves as it is both hugely complex and secretive. By adhering to Google’s own search guidelines and following best SEO practice, you can reduce the risk of your website tumbling down the search rankings when updates are released.

In summary, it is clear that Google is prioritising trusted, accurate and relevant results. Websites that are producing and publishing quality content from authoritative figures are being rewarded, while YMYL websites that feature outdated content and have not made improvements in response to the E-A-T update are seeing a decline in rankings and traffic.

What should I do if my website has been impacted?

SEO is a vast topic with hundreds, if not thousands of factors at play. Experienced SEO consultants work on websites with Google’s quality rating guidelines at the forefront of their minds.

There is no quick ‘fix‘ when it comes to SEO but if you have concerns about the health of your website then consider getting some expert SEO help and reduce your chances of being hit when Google rolls out algorithm updates. It is impossible to foresee future Google updates but by always applying best practice your website is far more likely to move in the right direction. 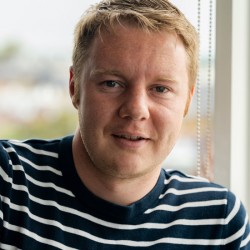 James joined the Blue Frontier Digital Marketing team as a Content Writer in December 2018. Graduating with a degree in English and History, he has since obtained experience in digital marketing from the logistics industry. He is now developing a deeper knowledge of SEO and utilising his writing skills to help businesses improve their online visibility.