The Rise and Rise of Video

Every hour, as the world’s second largest search engine, YouTube has 1 TB of video content added to its platform. More video is uploaded to YouTube every 30 days than in the last 30 years on the 3 major US TV networks.

So why is video so popular? The rich content is easier to digest than text and more interesting than static pictures, video is also easier to recall and engage with. Unbounce reports that including a single video on a landing page increases on-page conversions by 80%. According to one source, real estate listings that include a video receive 403% more enquiries than those without.

The two largest websites in the world, Google and YouTube, ultimately dictate your page ranking. By linking your website to your YouTube channel and increasing your visitors' stay by enticing them to watch a video creates dwell time. Keeping people on your site longer raises your rank on google. Moreover, each link from a video to your site is taking people in the right direction, rather than a link away. Whether your approach is to host your video or have YouTube host it will depend on your video and your business.

Video is part of the switch from traditional print and TV to online advertising. If you look at global ad spending as an example, according to Magna, the research arm of the media buying firm IPG Mediabrands, revenue for online/digital overtook TV spend globally in 2017 and accounted for $209 billion worldwide. UK business, Next have reported that they intend to increase their digital spend in 2019 by 125%, from 12 million a year to 28 million and are diverting funds from traditional print to do so.

In the days when it was cumbersome and sluggish and demanded technicians in every department, video was an expensive proposition. Now, video can be captured at 4K on a decent DSLR camera. A competent videographer can now be a one-person crew with a small Steadicam and decent lenses who will be in and out of a business within a day and have footage rivalling that of a high-end production unit.

Footage can be loaded onto a PC or MAC and edited with professional software within a day. So, for the cost of a dedicated professional, you can add tens of thousands of visitors to your site. According to Hubspot, simply adding a video can add 200-300% of extra traffic to your website, especially if it gets shared and debated. If your business is anything to do with sales, then those visitors are prime targets for your product.

Attention spans are shortening. Our busy lives and the ease with which video can be digested are the driving factors in its popularity. They say a picture is worth a thousand words, what does that statement say about video? Moreover, we all prefer to be shown how something works rather than having to follow a user guide. According to Forbes, 59% of executives would rather watch a video than read text. YouTube reports that mobile video consumption is rising at a rate of 100% every year, and when questioned by eMarketer in the US, 65% of marketers responded with plans to increase their mobile budgets to account for video.

The Power of Video on Social Media

It also turns out that quite a few of us also love Social Media. If you’ve ever caught yourself scrolling through Instagram, or gazing vacantly at Facebook, wondering how you got there, then you may be one of the many experiencing ‘scroogle’, the precise moment you get sucked into social media, forgetting what it was you were looking for in the first place.

Whilst scrolling social media, this is an ideal time to insert a video.  Views of branded video content increased 258% on Facebook between 2016-2017 (source: Tubular Insights), and a video Tweet is 6x more likely to be retweeted than a photo (source: Twitter). So if you haven’t thought about using video content on your social media channels, now is definitely the time to leverage growth in this area. Just remember attention spans are low, so often shorter videos work best, with a clear call to action.

From behind the scenes to live events or in-depth company profiles, Blue Frontier can help your business or organisation with video creation.

Find out more about our Digital Marketing Services

Are You Ready for 8K Video?
Creating a Successful YouTube Strategy 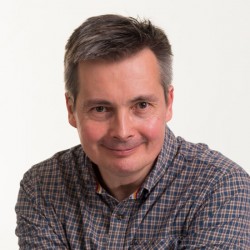 Nick has worked in Imaging for most of his life. His work has been seen in print, TV and video for (among others) co-op, Canon, London Zoo, Rolls Royce, IBM, Explore Travel and various county councils. Nick specialises in people, product, food and travel and has followed the IT and camera industries closely.