Each year, the World Health Organization (WHO) dedicates the 24th March to raise public awareness of Tuberculosis (TB). The date is of great significance as it marks the day in 1882 when Dr Robert Koch announced that he had discovered the bacterium that causes TB.

Tuberculosis (TB) is an infectious disease that generally affects the lungs, but can also affect other parts of the body. It is usually caused by Mycobacterium Tuberculosis Bacteria (MTB) that is spread through inhaling tiny droplets from coughs or sneezes of an infected person.

In some cases, TB can develop a resistance to the antimicrobial drugs used to cure the infectious disease. This form of tuberculosis is known as multi-drug resistant TB (MDR-TB) and requires a much longer course of treatment and access to different drug formulations.

TB is a deadly disease, but it can often be cured if treated in time, and with access to the right medication.

The Global Fight to End TB

Tuberculosis continues to have devastating health, social and economic consequences, and there are growing calls for an accelerated TB response.

Heads of State came together in September 2018, in the first ever UN High-Level Meeting, where strong commitments were made to end TB.

The World Health Organization (WHO) has launched a joint initiative “Find, Treat, All. #EndTB” with the Global Fund and Stop TB Partnership. The initiative aims to accelerate the TB response and ensure access to care, in line with WHO’s overall drive towards Universal Health Coverage.

Connectivity Solutions in the Fight Against TB

In 2016 we were involved in a pilot programme in South East Asia to implement a connectivity solution in TB hospitals and clinics. This enabled the in-country National Tuberculosis Programme (or NTP) to have a complete view of their patient testing for both unconnected and connected devices.

In 2017, Blue Frontier and partners provided a bespoke connectivity solution for their medical devices and consultancy on in-site connectivity of a national rollout program to all government TB clinics in a prominent South Asian country.

To learn more about the problems and opportunities faced by the TB community, Blue Frontier attended Union the World Conference on Lung Health, first in Guadalajara, Mexico in 2017, and again in The Hague, the Netherlands in 2018.

At The Hague, we presented Bm2Dx, a Biomarker to Diagnostic database. In its first phase, Bm2Dx has focused on identifying new and existing TB biomarkers for researchers, test developers, and donors. You can find out more about Bm2Dx and our partnership with the Foundation for Innovative New Diagnostics (FIND) by reading our case study.

In our current work with FIND, Blue Frontier is supporting the organisation in their work on a TB Action Dashboard Showcase project. This will empower lab staff, regional officers, and government officials in tuberculosis programmes worldwide, allowing them to make more informed decisions on the data collected from their connected devices in the field.

Find out more about the development of connected health solutions. 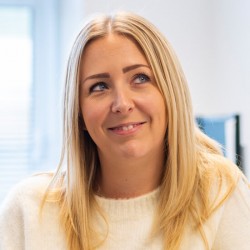