The Blue Frontier pool tournament has kicked off!

It’s time for a bit of work-based competition.

Last week the group stages started. Each player in a group will play their opposition once. The two best players from each group will go through to the knockout stages, with the big final taking place at the end of May.

The team’s history when it comes to pool is a bit of an unknown with everyone being modest about their abilities. While there aren't any seeds, we do have a sneaky suspicion about who’s going to win.

There were a few disagreements over the rules, which needed to be carefully monitored by the Chief Organiser, Ollie. But it's not ended in fisticuffs yet.

Round 1 was a bit uneventful; we haven't seen any upsets yet. Although we're still waiting on few people to play their games, so fingers crossed! 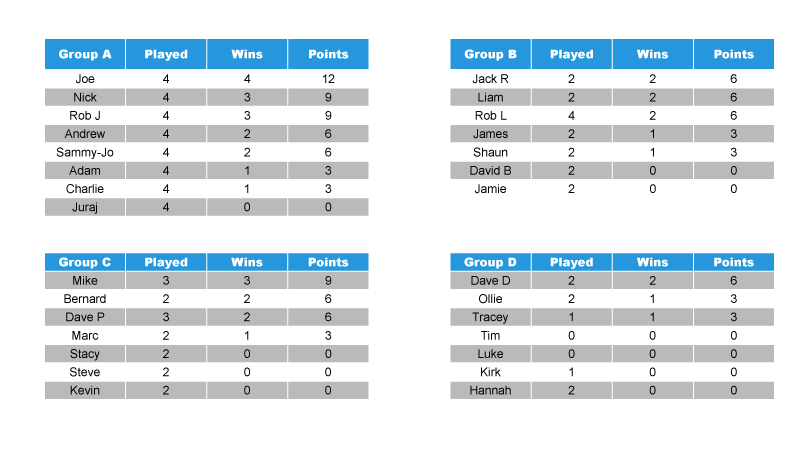 Week 2 finished with a few people making the score sheet, although we're still waiting on people to play their first game! And it looks like Group A is the only group committed to the tournament.

With holidays arriving for some staff over Easter, we're still waiting for a few games to be played.We're getting an idea of how Group A will turn out with Joe unbeaten so far. It's between Nick, Rob and Andrew to see who's going to take the runner-up spot.

It's still early, but Mike looks like he's winning Group C. But there are still games to be played, so we'll have to wait and see.

Week 4 is now under way and there’s still everything to play for!