Today marks 10 years that Mr. Rob Jolliffe, our Web Design Manager, has been at Blue Frontier.

In 2008, Rob joined us as a Junior Web Designer working in our Web Design and Development team. With a flair for design, it was clear that Rob knew what it took to create stunning websites. Continually building on his design skills, Rob spent those early years learning more about code and how to optimise sites for UX alongside our experienced developers. He’s worked on numerous projects throughout the years and has been an integral part of the team.

From his humble origins as a Junior Web Designer, he rose through the ranks to become the Web Design Manager in 2015.

The team got together to hear the surprise announcement as James gave a few words to thank Rob for his time at Blue Frontier.

“Rob Jolliffe is an extraordinary guy – he is conscientious, hardworking and dedicated, he has supported and helped build Blue Frontier for 10 years and his values have become ingrained in the culture of this business. It is a privilege to have Rob in our team and we thank him for everything he has done and continues to do for Blue Frontier.”

And it wouldn’t have been right without a speech from the man of the moment, which turned out to be mildly reminiscent of Bilbo Baggins' birthday speech in the Fellowship of the Ring.

But rather than pulling off Bilbo's favourite party trick, Rob went on to give his thanks for having the opportunity to work at Blue Frontier in 2008 and for the memorable years.

It's been a wonderful 10 years and Rob's seen the company grow unrecognisably during his time here. So, to say a big thank you, we gave him a few pressies to mark the most important of anniversaries.

A workaversary wouldn’t be a workaversary without a huge bottle of Champagne and lovely bouquet of flowers! And because he’s a big Real Ale fan, we also gave him a couple of bottles of IPA.

And for the icing on the cake, and to show Rob how much he means to the team, we contributed to his 2018 holiday fund so that he could enjoy a relaxing trip in the destination of his choice!

We’re really proud to have him working in the team. And here’s to the next 10 years! 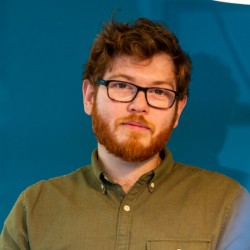 Charlie started at Blue Frontier in 2017. He brings with him a passion for creative writing and experience in content and social media - his favourite channels being Twitter and Instagram. Charlie is also developing his knowledge and skills in SEO, hoping to combine these skills to help businesses with their online visibility.